My Full Speech on the Financial Guidance and Claims Bill 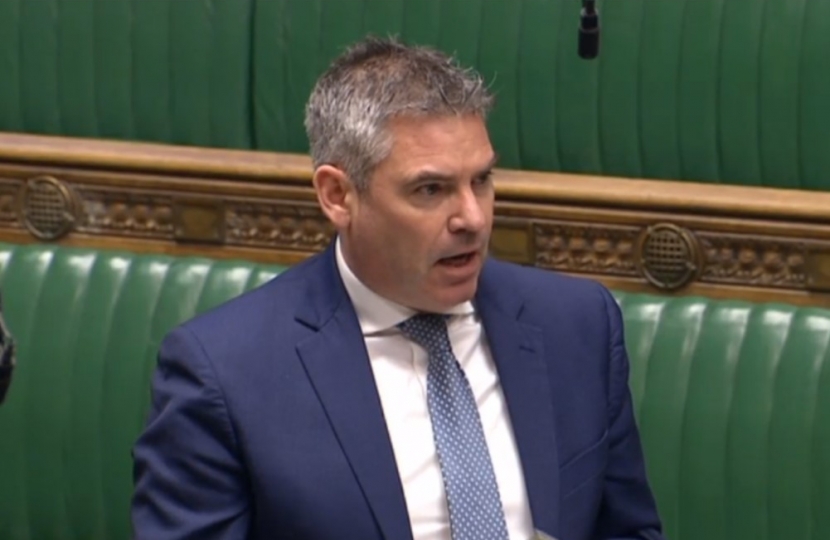 Unfortunately due to time constraints, I was limited to a reduced version of this speech, however I have contacted Ministers on these points of this Bill. This Bill is important in ensuring people have access to free and impartial financial advice, simplifying money management, tougher regulation on claims management companies and to ban pensions cold calling which preys on the elderly.

Before I start,  I would like to declare an interest as a former insurance broker and the Chair of the APPG for Insurance and Financial Services,

as my contribution will be concentrating on the parts of this bill which seek to benefit consumers and those who are most in need of free and impartial financial guidance.

And in this respect, the Government should be congratulated for its exceptionally thorough process, in ensuring we have a bill that is right for both consumers and a competitive industry.

No less than three reviews have been undertaken and as a result of this extensive outreach and consultation with stakeholders, the bill has been widely welcomed across the Financial Services industry.

And we should never underestimate the benefit of access to independent and impartial advice, as it is often some of the most vulnerable sections of society who benefit as a result.

As my Rt Hon Friend, the Secretary of State for Department of Work and Pensions, said during the progress of this bill, ‘ensuring that people, especially those who are struggling,

is an important step towards improving people’s financial capability.’

So as I said, I would like to focus on three key areas of the Bill, firstly the creation of a Single Financial Guidance Body (SFGB), then move on tho the changes in the way claims management companies will be regulated and then finally cold calling, all of which are welcome and needed changes.

Looking at the creation of the SFGB, I believe that it is a sensible step to amalgamate the current three bodies into one and so merging the functions of the Money Advice Service (MAS), The Pensions Advice Service (TPAS), and Pension Wise into one organisation will benefit consumers.

It is a positive endorsement that the likes of Scottish Widows have described this as “A major step in simplifying money management from the perspective of the public, where the full spectrum of support will soon be found in one place”.

The Bill also requires that the SFGB works closely with others in the financial industry, the devolved authorities and the public and voluntary sectors in order to share knowledge.

and I know this approach has the broad support of the insurance and financial services industry but it is important that once set up, the SFGB works with all stakeholders to fulfil its objectives and, of course ensure good customer outcomes

With the right delivery, it will enable people to have access to both the information and guidance needed to make the important and effective financial decisions that we all have to make.

whilst also offering convenience and a strategic approach to supporting consumers where needs and financial understanding are often interlinked.

With this bill, we have an excellent opportunity to improve financial resilience by promoting early intervention to help prepare people for income shocks and life events,

such as the need to plan ahead to pay for care, as well as the benefits of protection products, such as income protection, critical illness and life insurance.

Moving to New Clause 1, it is clear to me that the FCA is better placed than the SFGB to develop a view on the best course of action on credit cards.

The FCA has the resource the body will not have, alongside strong powers to protect consumers. Furthermore this amendment would cause the SFGB to duplicate the work of the FCA, creating unnecessary and additional bureaucracy that is not in anyone’s interests.

The FCA has already undertaken significant work on credit cards and taken action to address their concerns about persistent credit card debt, so I am not supportive of this new clause

The second area I would like to look at is the urgent need for reform of Claims Management Companies.

This is an industry that I saw grow rapidly during the latter of my 20 years working in the insurance arena and there are currently around 1,400 authorised claims management companies in operation.

I know there have been previous calls for the Financial Conduct Authority (FCA) to assume responsibility for CMCs and so the fact that Government is taking action on this is to be warmly welcomed.

The Association of British Insurers have stated: “Confirmation of tougher regulation of claims management companies cannot come soon enough for people who are plagued by unsolicited calls and texts. Disreputable firms are fuelling a compensation culture that contributes to higher insurance costs for many”.

Last year alone there was a total of 752 authorised Personal Injury CMCs– more than in any other claims sector, including PPI

Measures within this Bill will go some way to tackle bad practice in the personal injury claims market, which has cost insurance companies, put up premiums for consumers and frequently delivered outcomes where the claimant’s interests were not being put first.

And the Government has already previously expressed its opinion that CMCs:

misrepresent the service offered to their consumers;

rely on nuisance tactics such as unsolicited calls and texts;

So, added to some of the measures in the forthcoming Civil Liabilities Bill, such as tackling the high frequency of whiplash claims, this will help to ensure success in the Government’s wider efforts to tackle these problem areas.

Therefore it is encouraging that the insurance industry has confidence in the FCA’s more robust regulatory regime to properly oversee these firms…..

citing two significant benefits, both of which will play a vital role in addressing the problems associated with this sector:

Firstly, a strong regime, based on understanding the business models of individual CMCs, will prevent those firms that do not offer good value to consumers from operating.

Secondly, personal accountability for senior managers of CMCs will ensure that, when a firm is struck off, their directors cannot simply resurface as a new CMC, which is currently happening

And as a result of this change it is anticipated that consumers will be given more information about the services a CMC offers,….

more transparency about the fee structure…..

and therefore, it is important that improved regulation of CMCs is implemented alongside personal injury reform proposed in the Civil Liabilities Bill.

It can only be good news for the consumer, where their interests are put above all others.

This is an issue that I know is of great frustration and anger for my constituents, os I ma sure they will welcome that the bill gives new powers to the Secretary of State to make regulations to regulate Cold Calling,

and in doing so, honouring a Government commitment banning pensions cold-calling.

This will help to prevent the targeting of vulnerable pensioners by making it illegal for scammers to contact individuals to persuade them to transfer their pension savings into unsuitable or fraudulent investments.

It is important to remember that fraudsters have exploited people by preying on pension savings as a profitable target, which we cannot allow to continue

So, as I have said, I think this is an excellent bill, but I would like to propose a couple of areas where I feel it could be strengthened and Which I would ask the Minister to take into consideration.

Firstly, it would be useful if the minister could clarify exactly the scope that the SFGB will provide for consumers

and look at ways to support a number of interventions which will improve the retirement process, such as the introduction of a “Midlife MOT”

Swift action is necessary, in particularly with CMCs, where we are seeing a drastic spike in claims relating to gastric illness while on holiday.

It is not a coincidence that this surge has coincided as CMCs prepare for the deadline for bringing PPI claims and the introduction of measure to tackle whiplash claim frequency.

Finally, it is noticeable that there is no specific reference to insurance throughout the entire Bill, with the exception of a solitary mention when clarifying the definition of PPI.

There are sufficient concerns with financial inclusion in insurance to warrant the SFGB also providing guidance on these matters….

and, as I am sure the Minister is aware, Insurance brokers currently contribute by a compulsory levy to the Money Advice Service.

Information from the British Insurance Broker Association points out that as its members are FCA regulated firms, it is likely they will have to continue contributing to the new SFGB.

BIBA go on to point out that in its 2017 report, The Financial Inclusion Committee found:

Nearly 16 million adults in the UK have no home contents  insurance , in particular 60% of those earning under £15,000 having none

However, In 2016, the average claims payment was just over £2,500 -  a figure beyond the savings of many households.

The Financial Inclusion Committee went on to say that while banking, credit and savings have come under the microscope in the debate about  financial inclusion, insurance has been forgotten;

The FCA’s Financial Lives survey revealed over 12 million people who have insurance would go for the cheapest rather than compare cover from different products,

which means even those who do opt to take out an insurance policy, may find that when they come to making a claim, they have either invalid or inadequate cover.

As I have stressed previously, we cannot underplay the importance of access to good quality advice, particularly to protect the vulnerable consumers in our constituencies.

So, I do believe that there is sufficient scope for Insurance to be mentioned in this Bill and that the Minister could give consideration as to how this could be addressed at this stage.

So to conclude is my opinion that the opposition amendments in this part of the bill are unnecessary.

The Government is committed to banning pensions and CMCs cold-calling, moreover the Government together with the Body will keep the issue of cold calling under review.

Therefore, if the Minister could give consideration to the points I have made in his summing up,  I have no hesitation in supporting the Government in this Bill’s remaining stages.