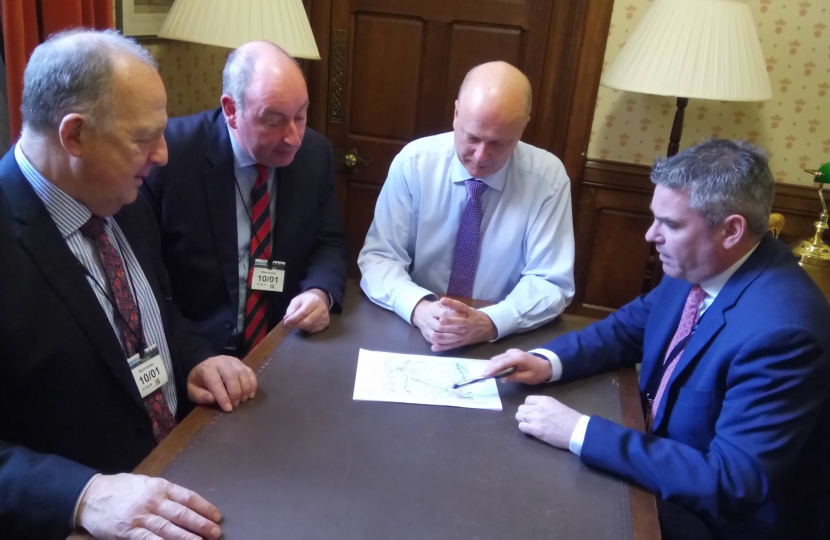 Mr Tracey commented:
“Many residents who live near or use the A5 will have experienced congestion issues which are all too regular. I arranged this meeting, which follows up on previous letters to Ministers and meeting with Highways England, to call for A5 improvements to be made a priority which would in turn benefit our community in a number of ways. A major pressure point is near the Dordon roundabout close to Birch Coppice.”

Cllr David Humphreys, North Warwickshire Council Leader said:
“A5 improvements in North Warwickshire is a must, not just in regards to alleviating current pressures, but also to ensure the infrastructure that future housing developments need as well as ambitious employment provision in our community.”

Cllr David Reilly commented:
“It was very useful to meet with the Secretary of State for Transport and Craig to be able to express local Council concerns with the future of the A5 road – a Warwickshire County Council transport assessment highlighted the importance of, and need to have a sustainable A5 growth corridor. Warwickshire County Council are in the process of funding bids to improve this vital road.”

The Transport Secretary was left in no doubt that the A5 needs to be a priority by the three local politicians and promised to liaise with Highways England over the issue. Craig Tracey MP had recently sought assurances by Highways England that HS2 would not delay any future A5 improvement works.