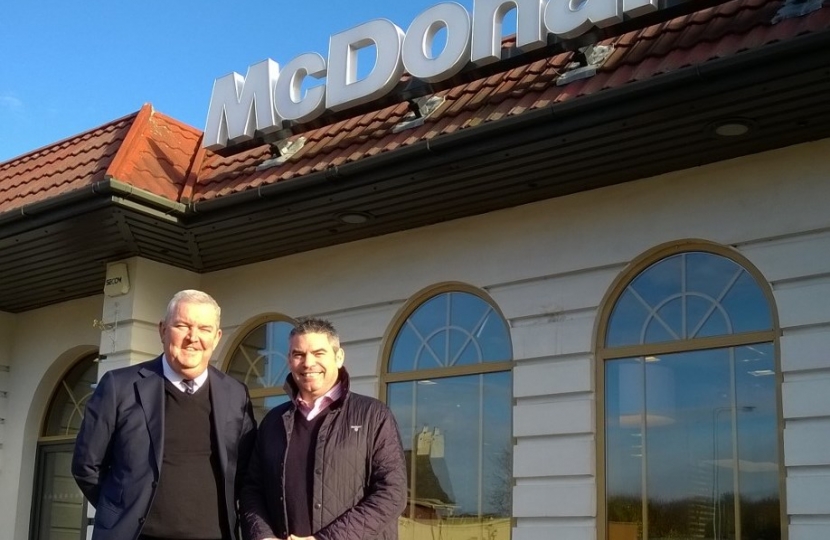 Craig Tracey, who is looking to become the next Conservative MP in North Warwickshire & Bedworth, visited the McDonalds Restaurant at Bassetts Poles last week to see how the business is bringing apprentice and job opportunities to local people.

Craig met with Franchisee Douglas Wright, who went from working at a McDonalds after leaving school to now owning 10 restaurants 30 years later.

Craig Tracey commented:
“McDonalds clearly look after their employees well – Douglas is a great example of someone who went through the system and has been very successful. They are offering Apprenticeships to local people, helping them gain formal qualifications, giving key skills and experience to have successful careers. The Governments focus on an apprenticeship drive has seen 2 million apprenticeships created nationally; this is hugely important in giving young people and school leavers the chance to get on in life.”

Franchisee Douglas Wright, said:
“We were pleased to show Craig what our restaurant brings to the local community: 85 jobs 5 apprentices and £2m to the local economy. The Government’s Apprenticeship scheme has helped us by giving people a formalised career path with an NVQ qualification at the end of it.”

Local Candidate Craig, who’s pledged to help create and support thousands of more local apprenticeships if elected in May concluded:
“This was a really interesting visit, and shows how important apprenticeships can be for giving opportunities and skills to the next generation.”