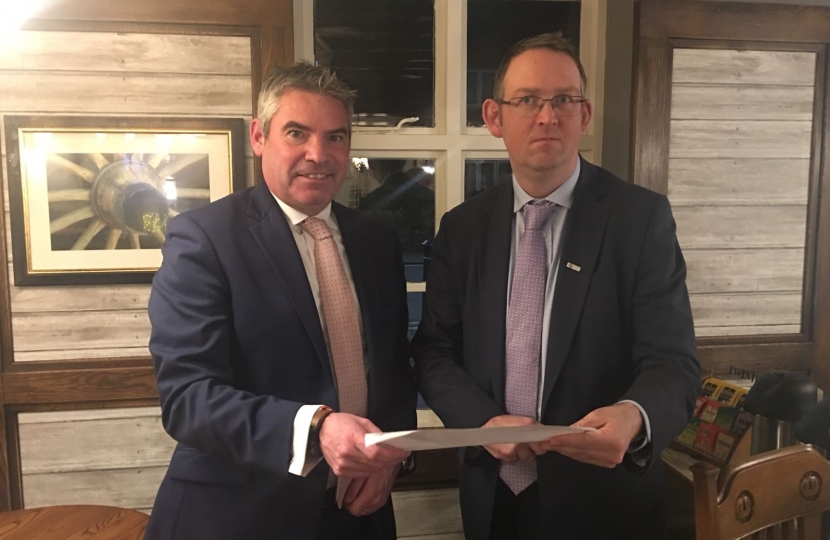 Local Member of Parliament Craig Tracey has called on Transport Ministers to ensure a notorious accident blackspot in our community receives part of a new Road Safety Fund which is linked to HS2 Phase one affected areas.

Mr Tracey brought Transport Minister Paul Maynard to the constituency last week to meet with those who are impacted by HS2. This coincided with taking the Minister to the Trinity Road/Overwoods Road junction near Kingsbury.

The Government have announced a scheme of £30m fund for road safety projects along the HS2 Phase One line of route for schemes such as traffic calming, safer junctions or better pedestrian crossings. More than £8m of which will be spent in Warwickshire.

Craig Tracey raised this subject in Parliament to Transport Ministers, stating:
“I warmly welcome last week’s announcement of an £8m road safety fund for areas of Warwickshire affected by HS2. And would the Secretary of State agree with me that the Trinity Road/Overwoods road Junction in my constituency, which has seen numerous fatalities & serious accidents, would be an excellent candidate for some of this funding given that a proposed solution has been thrown in to doubt due to the development of HS2.”

Minister Chris Grayling replied:
“I am glad that the Under-Secretary of State for Transport, (Paul Maynard), who is responsible for HS2, was able to visit that junction last week with my hon. Friend the Member for North Warwickshire (Craig Tracey). I am also pleased that Warwickshire County Council has been such a beneficiary of the available funding. While it will be for the council to decide what schemes to support, I hope that it will focus on where it can make the biggest difference to safety.”

Craig, North Warwickshire and Bedworth’s MP, explained:
“Although I am against the HS2 scheme, I welcome this funding as someone who has campaigned for improved road safety measures in our community for years. I have been on record previously that the Trinity Road/Overwoods Road Junction area needs urgent safety measures following tragic fatalities and serious collisions. We thought we had been successful in this campaign with funding generated from a nearby new build housing estate reinvested in traffic lights and signage, however this has been cast into doubt due to the HS2 project.

“Following the Minister’s response I am calling on Warwickshire County Council to make this accident blackspot a priority for this funding. Our community is the worst affected by HS2, therefore it is only right that a significant proportion of this road safety fund is invested in North Warwickshire with a number of roads and junctions needing attention.”