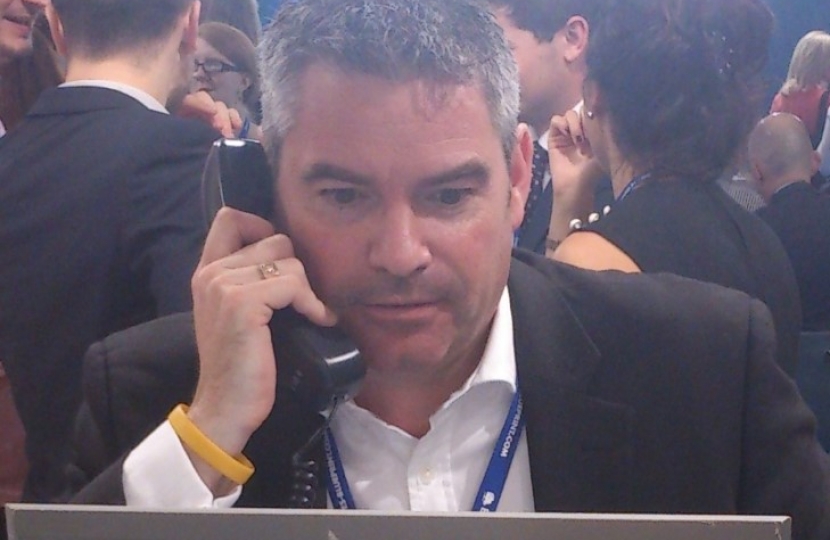 9708 broadband connections in North Warwickshire and Bedworth are not getting the proposed minimum broadband download speed, according to a new report from the British Infrastructure Group of MPs (BIG) co-signed by Craig Tracey MP.

The Local Member of Parliament has joined 55 colleagues from across political parties to co-sign the British Infrastructure Group of MPs’ (BIG) latest report, ‘Broadbad 2.0’.

Craig explained:
“9708 broadband connections in North Warwickshire and Bedworth without fast broadband make up at total of as many as 6.7 million broadband connections across the UK that do not receive speeds above the proposed minimum standard. Frankly that is not good enough and the Broadband 2.0 report calls for proper action.”

The report criticises the fact that data is not available to know whether poor broadband speeds are due to homeowners being unable to order a faster service or whether the nationally mandated faster Internet is simply not available to their property.

The report also investigates broadband customer services to find a worrying lack of minimum standards. Of the major broadband providers in a voluntary agreement with Ofcom, none could provide BIG with any clear information about their complaints procedures, or any amount of compensation that they currently pay to their customers.

Craig and 55 colleagues therefore call on the government, Ofcom and broadband providers to urgently improve the quality of broadband customer services through the following recommendations:

Progress secondary legislation setting out the terms of a broadband Universal Service Obligation (USO): The Digital Economy Act 2017 sets out provisions for a USO that defines a minimum broadband download speed of 10 Mb/s. In order to set the terms and scope of this USO, secondary legislation to the Digital Economy Act must be progressed by the government.

Provide statutory footing to the Voluntary Codes of Practice for broadband speeds: Some of the largest UK broadband providers operate according to Voluntary Codes of Practice regulated by Ofcom. The codes of practice entail an agreement on the part of providers to share clear information about their broadband speeds, and provide redress for customers when speeds are poor. However, the voluntary nature of these codes is insufficient in a rapidly developing telecoms sector. BIG therefore calls on the government to provide Ofcom with the mandate to legalise these codes of practice, in order to make broadband providers accountable to the law.

Lead on the improvement of data collection: Broadband download speed data recorded by Ofcom fails to differentiate between superfast connections that do not reach speeds above the proposed minimum standard of 10 Mb/s, and those connections whereby customers have actively chosen not to purchase superfast broadband. It is therefore almost impossible to determine the exact number of UK broadband customers that do not receive the speeds that they pay for. BIG calls on Ofcom to lead on the improvement of collecting broadband speed data that distinguishes between the take-up and availability of superfast broadband speeds.

Consider fixed broadband speeds in a new automatic compensation scheme: It is unacceptable that Ofcom has not considered whether broadband customers should be automatically compensated for consistently failing to receive the speeds that they pay for. Broadband speeds are a key indicator for whether customers are receiving a satisfactory service.

Take responsibility for making customers aware of their complaints and compensation procedures: BIG calls on broadband providers to take responsibility for communicating future changes to their customer services in a clear and concise manner, in order to improve accountability and transparency in the sector.

For further information about BIG, and to read the report in full, visit www.britishinfrastructuregroup.uk and follow BIG on Twitter at @BIG_MPs