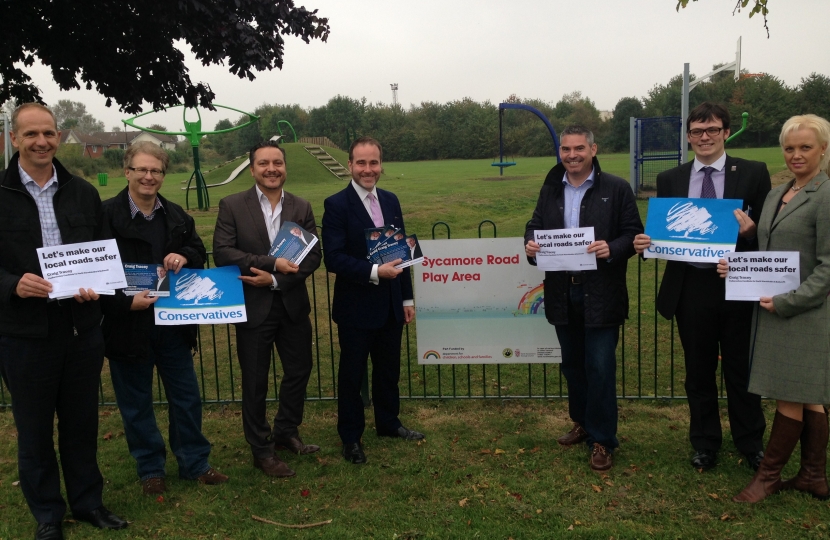 Craig, who lives in Shuttington, near Polesworth said: “We have been speaking to many residents on the doorsteps to find out what issues matter most to them. One of the issues that regularly comes up is our local roads; whether that’s speeding, parking, potholes or dangerous areas.

“I believe that we should be doing more to raise awareness of road safety in local communities to protect young people, the elderly and residents.”

The Safer Road campaigned initially focused on Sycamore Road in Kingsbury, near a children’s play area.

Craig explained: “We went to talk to residents along the road who are affected, and who are genuinely concerned about the speed of motorists, particularly with a park so close by. I am interested to hear what solutions local people want, as a local man myself and as the candidate, it is my job to stand up for residents. I certainly think we can be doing more to make our roads safer, and urge motorists to slow down in residential areas.”

Craig was joined in Kingsbury for the ‘let’s make our local roads safer’ campaign by neighbouring Tamworth MP Chris Pincher and other local residents who were supporting his campaign.

Chris Pincher MP said: “Congratulations to Craig on being selected as the Conservative Parliamentary Candidate for North Warwickshire.  Craig is an excellent choice - local to North Warwickshire, an experienced and committed local campaigner who knows the issues that matter, and a good bloke.  As neighbouring constituency MP for Tamworth, I look forward to working with Craig.  Last week I joined Craig in Kingsbury to support his campaign for ‘Safer Roads’ and it was great to hear so many people on the doorstep backing his common sense approach to solving a problem in their local community. Good luck to Craig.”

Craig pledged to campaign for safer roads across the constituency, working with local people and councils. He concluded: “A common sense approach is needed locally, and I hope this campaign will go some way to making our local roads a safer place."