Welfare of Farm Animals and Livestock

Thank you for contacting me about the welfare of farm animals and livestock. On this page, you will see my responses to common enquiries regarding the welfare of animals on the farm, during transportation, and the conditions in which slaughter should take place.

It is also governed by the Animal Welfare Act 2006, which makes it an offence to cause any unnecessary suffering to animals or to fail to provide adequately for their welfare. Under the Animal Welfare Act, local authorities have powers of entry to inspect complaints of suspected animal cruelty and neglect. A number of bodies also have the power to take out prosecutions where necessary.

I understand concerns on this matter, although the UK has some of the highest standards of animal welfare in the world. There is comprehensive legislation to uphold these standards, as well as guidance and Codes of Practice on how best to protect the welfare of specific animals on farms.

The Government has already banned cages or close confinement systems where there is clear evidence that they are detrimental to animal health and welfare. I am also aware that all major supermarkets have said they will stop selling eggs from hens in enriched cages by 2025.

On pig welfare, the aim is to get to a point where traditional farrowing crates are obsolete and where any new system protects the welfare of the sow, as well as her piglets. As I understand it, important steps have been made on the use of free farrowing systems, but more advances are needed before the compulsory replacement of farrowing crates can be recommended.

The Government is committed to making the UK a world leader in protection of animals as we leave the EU. There are plans to increase maximum penalties for animal cruelty from six months' to five years' imprisonment and statutory welfare codes are being updated.

The UK's strong commitments in this area are reflected in World Animal Protection's recent Animal Protection Index, which judged 50 countries on their policy and legislation for animals and saw the UK ranked joint top alongside New Zealand, Austria and Switzerland.

However, there are always improvements to be made. Ministers are fully committed, for instance, to ensuring that antibiotics are used responsibly and efficiently. In September 2016, plans were announced to tackle the issue, with long-term sector-specific reduction targets set to bring sustainable change across the agricultural landscape.

While we are still in the EU we are unable to take action on this issue because under European Union single market rules it is illegal to ban the export of animals to other EU countries; there are instead EU and UK laws to protect the welfare of live animals during transport.

While the UK negotiates our departure from the European Union, we will remain a member and will continue to exercise the rights and obligations that come with membership. However, the Government has a Manifesto commitment that as we leave the European Union, we can take early steps to control the export of live farm animals for slaughter. I do not see why this principle should not also extend to live exports for fattening.

I look forward to seeing progress on this important issue.

Following a review from the Government the Environment Secretary has announced new plans to make CCTV mandatory in all slaughterhouses in England.

Announcing steps to deliver our manifesto commitment for CCTV to be required in every slaughterhouse in England (in the areas where live animals are present) is an important next step towards reinforcing our status as a global leader. The Government has also confirmed it will raise standards for farm animals and domestic pets by modernising statutory animal welfare codes to reflect enhancements in medicines, technology and the latest research and advice from vets.

As we prepare to leave the EU, these measures show consumers around the world that our animals are protected to the very highest standards.

I am pleased to read that the Food Standards Agency estimates that 94 per cent of slaughtered cattle, 96 per cent of pigs, 90 per cent of sheep and 99 per cent of poultry are now processed on premises with CCTV, and the Government is keen to see the minority of abattoirs still without CCTV move quickly to introduce it.

Although both myself and the Government would prefer all animals to be stunned before slaughter, I recognise the requirements of Jewish and Muslim communities and accept the importance they attach to slaughter in accordance with their beliefs.

There are long-standing provisions in UK law that, subject to specific requirements, permit the slaughter of animals without prior stunning to meet Jewish and Islamic religious requirements.

The Government is determined to ensure that religious slaughter is only carried out by licensed slaughtermen in approved or regulated slaughterhouses. Slaughter is not and must not be permitted in any other place, even for personal consumption.

There is no national or EU requirement to display the method of slaughter on meat products but where this is included it must be accurate. Consumers should have the necessary information available to them to make an informed choice about their food, and this is something that the Government will be able to consider in the context of leaving the EU.

I have written to the Minister at DEFRA regarding the calls for mandatory stunning of animals before slaughter and method of slaughter labelling on meat products.

You can find the response from then Minister George Eustice MP below. 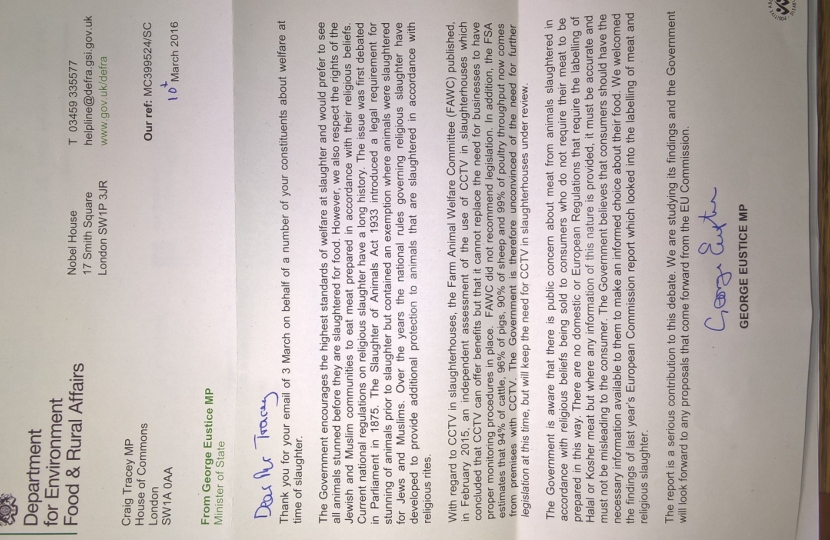