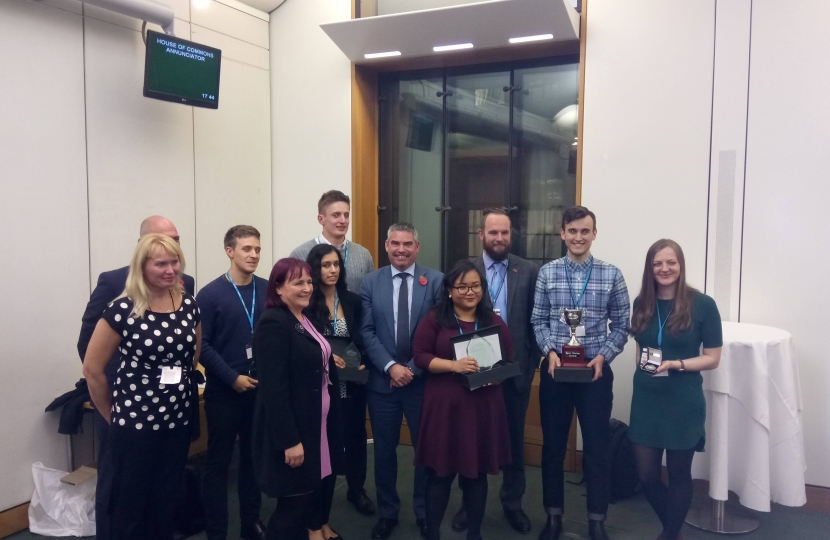 An award ceremony took place in Parliament last week to promote road safety in memory of Sean Morley, a student and Nuneaton Rugby player who was tragically killed in a hit and run near Bedworth aged just 20.

The event is the initiative of Sean’s parents Kerry and Gareth Dean,  Dr Lucy Rackliff of Aston University, and AIRSO the road safety charity, and was hosted in Parliament by Craig Tracey MP for North Warwickshire and Bedworth.

Students from universities across the country entered showcasing their thesis, research and projects aimed at improving road safety and reducing accidents. Seven students were shortlisted for their work:

Sean Morley’s mother Kerry explained:
“We were extremely proud when Dr Lucy Rackliff asked to run the Sean Morley AIRSO Award back in 2014.  The idea being to allow graduates to showcase their ideas and theories before potential employers and experts rather than just shelve their university work.  Road safety is not the most exciting sector and struggles to bring in new blood and ideas but this is a great platform to share these findings and encourage fresh and innovative findings.

“Our MP Craig Tracey has given us huge support and enabled the award to be held in Westminster.  As a result, the award has had huge interest from parts of the industry.  We were grateful to speak with the Transport Minister, Chris Grayling, who will look to offer opportunities for the entrants to showcase their work at key events.  Many of these ideas are concepts which need to be put into place be it manufactured or investigated more to make them deliverable so it is really key to get industry experts and manufacturers involved.

“We are very excited with some of the work.  I particularly liked the concept of reflective knitwear, which could be used in school uniforms.

AIRSO is a road safety charity where members give their own time up to make positive things like this happen.  We thank them and also the two companies who sponsored the award, TTC Group and WRRS Consultancy.

“What makes the award so appropriate for Sean is that he was studying history and politics at university and had spoken of one day being an MP.  For MP Craig Tracey to organise the final judging to be in Westminster was really rather special.  I would give the world to have Sean back with us and some days are much harder than others but there is comfort that Sean’s name continues in such a positive way and through young people too.

We will work hard to bring this opportunity to more graduates and welcome all industry support to keep the Sean Morley Award going.”

The winner of the Sean Morley Memorial Award was Aaron Howard for his work on training car drivers to spot motorcyclists, Mr Howard commented:
“I am deeply grateful to have received the Sean Morley Award and to have presented alongside such excellent competition. It is my hope that my research will go on to help improve road safety in honour of Sean. I would like to thank the psychology department and in particular David Crundall for his belief in my work."

Also acknowledged for a prize was Lara Alvarez who explored the use of reflective clothing; she said:
“I'm very honoured to have received the award for best product from the Airso Sean Morley Award. My product is aimed towards everyone, no matter age or financial situation. Hopefully it's a product a lot of people would want to use to increase the safety on the roads and streets.”

Before the event Sean’s local MP for North Warwickshire and Bedworth Craig Tracey arranged a meeting for Sean’s family with the Transport Secretary to discuss road safety before giving those students shortlisted for the awards a personal tour of Parliament. Mr Tracey has called for stronger punishments for dangerous drivers in Parliament and commented:
“I am really pleased that we have seen such an interest from students across the country in the Sean Morley Awards and in trying to make a difference and improve road safety in the UK. Sean’s family and AIRSO have done a terrific job.”

Dr Lucy Rackliff of AIRSO (The Association of Industrial Road Safety Officers) and Aston University said:
“As an academic, I saw so much exciting and innovative road safety work being produced by students but there was no way to show it to the practitioners and policy-makers who could use it.  I hope that as the award develops and grows it will become a key route for new ideas and new talent to enter the profession.  The UK generally has a very good record for road safety, but there is always more we could be doing to prevent road fatalities and save other families from the grief and trauma Sean's family have experienced.”

Road safety and speeding motorists are important issues to local people. I am raising awareness of the issue in our local communities. I have surveyed residents' opinion on road safety & raised your views to the Minister for local Roads & the County Council.  I’m taking resident’s concerns on local road safety seriously.