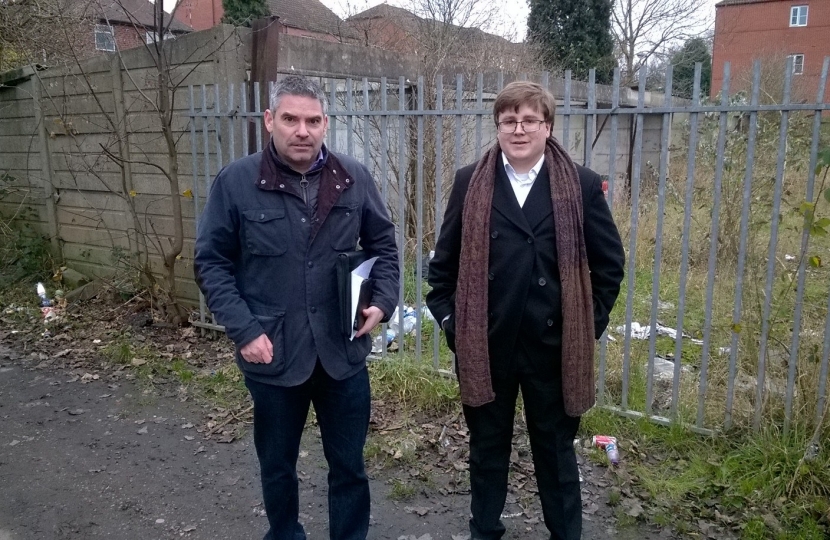 Residents have joined forces with local Parliamentary Candidate, Craig Tracey, to press Nuneaton and Bedworth Council to clean up derelict land on a Bedworth Street, which has become a local dumping ground.

At a meeting arranged by Craig and local campaigner Seb Gran, following complaints received from many local residents in Joseph Luckman Road, several areas of concern which have suffered from neglect over recent years were shown to Council Officials.

Craig Tracey, who is standing to be Bedworth’s next MP said:

“Talking to the local people, most who have lived here for many years, it is easy to understand their disappointment and frustration that despite their concerns regularly being raised, they seem to fall on deaf ears by their local Council. They are doing what they can themselves to keep not just their own pieces of land tidy but also the more easily accessible parts of these derelict sites. They take great pride in the area that they live and it is a shame that their enthusiasm is not being matched by their elected officials.

“Looking at one of the areas, I was surprised that the Council Officer said that it did not qualify as being “untidy”. The fact that it is full of litter, including a gas canister begs the question as to what actually does qualify as an “untidy site” and I have been assured that a definition will be provided to me.

“I appreciate that this is not the only site that the Council have to look after and they have to prioritise where gets their attention, however, this is a long standing issue which has not been tackled, surely the time for action to be taken is now long overdue. I would like to thank the Council representatives for coming out to face the residents and we look forward to receiving their reports and proposals.”

As a result of the meeting the owner of one of the areas of land will be issued with a notice to clear up the rubbish and mess which is causing so much concern for residents.

“It's been a productive meeting where we all got to raise these issues directly with the Borough Council. It's encouraging that so many residents are so passionate about their local area. It just goes to show that people in Bedworth care about their community, and that many people take huge pride in our town, and want to see it looked after better. Hopefully something good will come of this meeting and we may be able to slowly but surely improve the area from here. We shouldn't have to put up with land becoming derelict like this in Bedworth. Bedworth deserves better.”