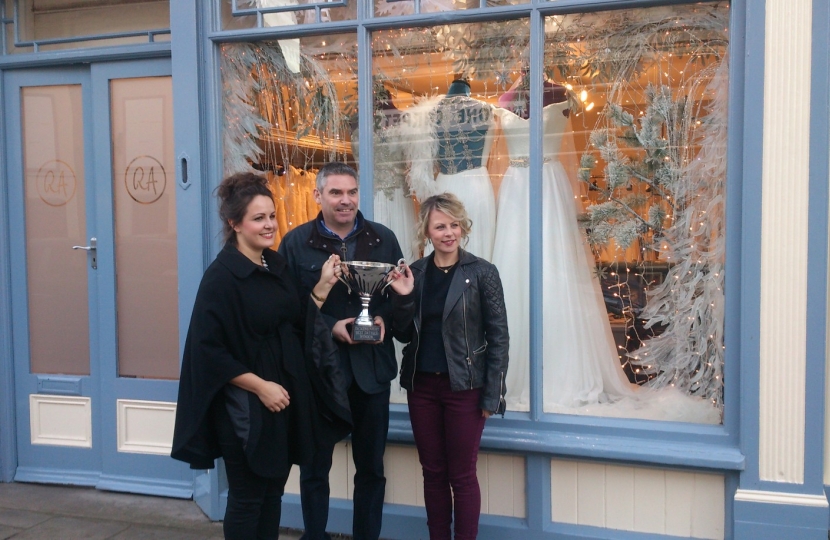 A local bridal shop was selected by judges Craig and Karen Tracey as winners of the best shop window competition at Atherstone’s annual Dickens Night.

Craig Tracey, who is standing for election to be Atherstone’s next MP said:
“Dickens Night brings together such a fantastic community spirit in Atherstone. Locals had a great time again - Karen and I enjoy ourselves every year here. We were especially proud to be asked to judge the shop window competition where there was a very high standard and we were impressed with how many local shops got involved, which hugely contributed to atmosphere on the night.”

In the end Craig and Karen, themselves recently married, chose Rachel Ash Bridal-wear as the winner.

Karen said: “There were a number of contenders, but Rachel Ash Bridal-wear really stood out for us with their beautiful window. Congratulations!”

Ash from Rachel Ash Bridal-wear said: "We are delighted to have won Best Dressed Window. It's a fantastic way to celebrate our 1st year in Atherstone. Thank you to everyone who has supported us and we look forward to next year!"

Thousands of local people attended Dickens Night which showcases local shops culminating in the switching on of the Christmas lights before a spectacular firework finale. Father Christmas was also in attendance.

“Chrissy, Ian and their team have done a fantastic job organising the event and I would like to thank everyone involved for making Dickens Night such a special, enjoyable night in Atherstone.”