My EU Withdrawal Speech in full 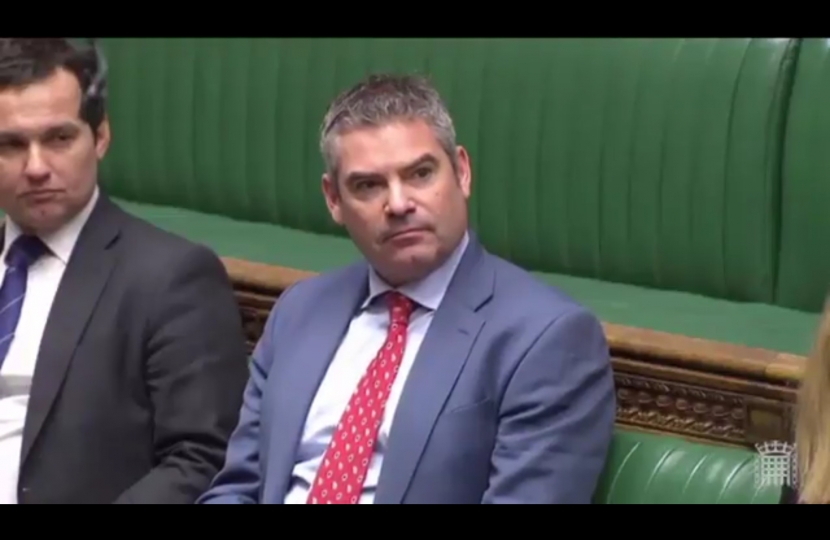 “Thank you for calling me to speak in this debate, which is likely to be one of the most important in this Parliament.

I voted to leave EU, as did 67% of my constituents across North Warwickshire & Bedworth as during the campaign it was clear that there was disillusionment with what it had become.

The message I got loud and clear from the doorstep was that yes, there was a degree of concern over uncontrolled immigration, but the overriding frustration was around our sovereignty and consequently the ability to control our own laws.

This Bill will repeal the European Communities Act from the day we leave, bringing a welcome end to the supremacy of EU law in the UK.

And although the ECJ will continue to provide the means for interpreting EU-derived law created prior to the date of departure, It will no longer have jurisdiction in the UK after we leave.

I support the main purpose of the Bill in ensuring that the UK has a functioning statute book once we leave the EU, which is obviously in the national interest.

Obviously, nobody benefits from a cliff-edge departure, so it will provide businesses and individuals certainty that the same laws, which existed before the UK’s withdrawal, will still exist afterwards, as far as practical.

The reason behind this Bill is not to introduce major policy changes, being largely technical in nature, but is the way to ensure that the UK Parliament, and the devolved administrations become the supreme law making bodies in the UK.

Future laws will be made in London, Edinburgh, Belfast and Cardiff.

When I look back at the re-negotiations prior to the referendum, the result could have been very different had the EU showed a willingness to reform, or allow some concessions prior to the vote.

There seemed a complete lack of desire for the UK to stay and the fact we came back virtually empty handed was not a message missed by my constituents.

And like many of them, I have seen first-hand the negative impacts that EU laws and regulations can have on our local economy, during the 20 years spent running my own small business.

Many of the regulations and laws which affected my firm stemmed from Brussels, yet I was unable to trade with its markets!

To put this in to some context, only 5% of our businesses export to the EU, yet 100% are caught by its red tape, with small businesses usually disproportionately affected.

During the Referendum campaign, research across West Midlands small businesses showed that:

I am mindful though that we need to create an environment that works for everyone, not just those of us who voted leave, so I would ask the Govt to take into account the following two points as this Bill moves forward.

Firstly, businesses are already making decisions in preparation for March 2019 and they require legal certainty in order to meet their commitments to customers once we have left the European Union.

Given that much of the detail of the new legal framework will be brought forward through secondary legislation, it is vital that the process of the Withdrawal Bill and programme of statutory instruments be prepared well in advance of March 2019, to provide them with the confidence that they need.

Secondly, in order to avoid a legal vacuum upon leaving the European Union, it is important that any inconsistencies within existing EU legislation are addressed prior to transposition into UK law.

I would therefore stress the need for Government to consult fully with stakeholders throughout the process of drafting and laying statutory instruments, to ensure that any inconsistencies between EU and UK legislation, especially their practical implications, are fully addressed by these measures.

So to conclude, yes, there may be challenges ahead, but let’s not paint some idealistic picture that had the vote gone the other way, then it would be plain sailing in the years ahead had we remained “In”.

I firmly believe that there are exciting times ahead for the UK outside of the EU.

And with due considerations given to the issues I mentioned, I believe this Bill will provide the pathway to the smooth exit that we all want to see.

The opposition’s new position of leaving the EU but staying in the single market and customs union, would mean leaving only in name.

The single market and the customs union are the main and essential components of the EU and their decision to vote against and amend this Bill, is the latest attempt to destabilise the democratic mandate clearly given to us by the electorate.

In contrast, I will be backing it in the Lobby on Monday, supporting both my constituents’ and the UK’s democratic decision to leave the European Union.”