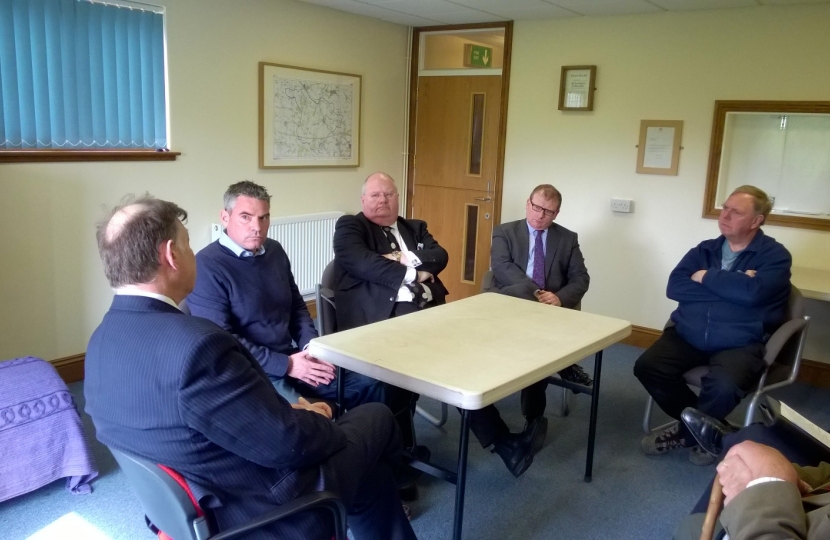 Craig Tracey MP for North Warwickshire and Marcus Jones MP for Nuneaton have today welcomed the Planning Inspector’s decision to reject Harworth Estate’s industrial development plans at the former Daw Mill Colliery site.  North Warwickshire Borough Council originally rejected the proposals back in 2015 and the MPs are delighted that the Planning Inspector has upheld this decision at appeal.

The local politicians had been working with residents and the Daw Mill campaign group LAWRAG to fight the appeal that Harworth made following the rejection from North Warwickshire Borough Council.

The proposals would have seen a rail hub built alongside 260,000 sq ft of commercial space at Daw Mill. This land has a restoration clause, with campaigners pointing to the condition which should see it revert back to protected greenbelt status after the colliery closed.

In upholding the Borough Council’s decision, the Inspector indicated that the possibility of the site returning to a green field, in accordance with the Restoration Plan, needs to be taken into account not only as a material consideration but as the baseline comparative scenario.

The Inspector indicated that both the openness and permanence of the Green Belt would be eroded the appeal proposal is inappropriate development in the Green Belt and should not be approved except in very special circumstances. Furthermore the inspector indicated that the impact of noise from the proposed development cannot be regarded as having anything less than a significant adverse impact.

Secretary of State for Communities Sajid Javid agreed with the Inspector’s decision with his document on Daw Mill outlining: “Overall, the Secretary of State concludes that the harm caused by the inappropriate nature of the proposal in the Green Belt and any other harm would not be clearly outweighed by other considerations and thus very special circumstances would not exist to justify development in the Green Belt. The Secretary of State concludes that there are no material considerations to indicate that the appeal proposal should be determined other than in accordance with the development plan and that the appeal should be dismissed and planning permission refused.”

Reacting to the decision Craig Tracey MP and Marcus Jones MP stated:
“We are very pleased that the Inspector has taken into consideration, not only our views and contributions to this debate, but those of LAWRAG, local residents, Parish Councils and North Warwickshire Borough Council who has stood by the local community. We would like to congratulate the organisations involved who have helped to ensure this successful outcome. The Greenbelt is of particular importance and the Government is committed to ensuring protections in relation to planning law. Clearly this has played a significant part in the decision of the inspector.”

As well as submitting his thoughts in writing, Craig Tracey MP also made representation at the appeal hearing to make the Independent Inspector aware of his concerns for the greenbelt at Daw Mill.  He and Marcus Jones MP also worked closely with LAWRAG to make the Secretary of State aware of further issues in the case which resulted in the Appeal being referred back to the parties.  Throughout the process the two MPs have pressed the Government to continue to rigorously protect the greenbelt.

The two MPs made clear to the Inspector their belief that the scheme did not align with North Warwickshire Borough Council’s Development Plan, but sought to undermine it.

Mr Tracey’s evidence at the hearing last year stated:
‘As with previous Green Belt policy, inappropriate development is, by definition, harmful to the Green Belt and should not be approved except in very special circumstances.’ – the Appellant even acknowledged this. This is tacit admission that the proposed development is inappropriate and I along with many local residents do not believe that they are able to demonstrate the ‘very special circumstances’ required for this scheme to go ahead.’