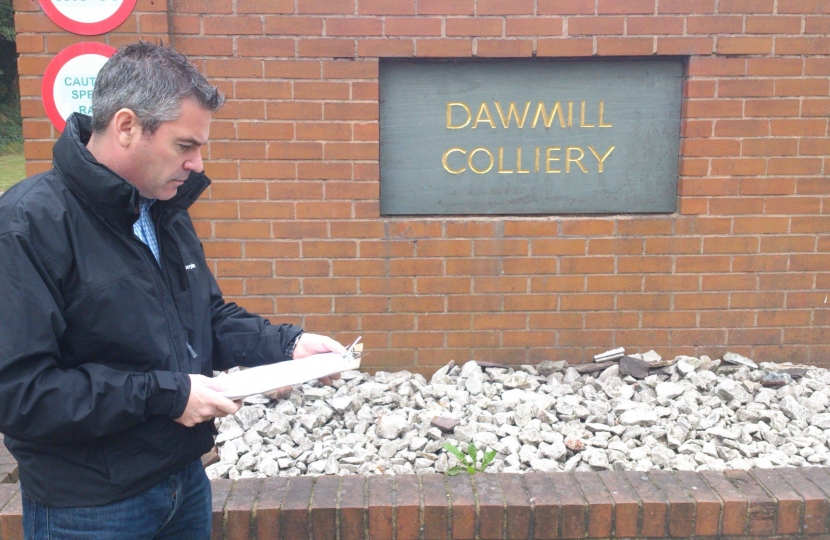 Craig Tracey, Member of Parliament for North Warwickshire & Bedworth has expressed his disappointment at Highways recent decision to back mitigation plans in support of Daw Mill development proposals.

The Local MP who has consistently opposed the Daw Mill proposals and worked with local action groups has written to the Highways Communities Department outlining the flaws in the application proposals, particularly focusing on changes to Church Hill and the Green Man Crossing in Coleshill.

“It is alarming for local residents, the so called ‘mitigation’ will exacerbate the current traffic problems at the Green Man Crossing. There is already significant over capacity of vehicles at these cross roads. Residents are understandably concerned over the impact that the proposed Daw Mill development would have on the local road network.

“I have asked Highways too look again at their decision as I believe they are wrong to now support the proposed changes in the layout in Coleshill.”

Craig's Letter is below:
I am writing in respect of Warwickshire County Council's response as Highway Authority to North Warwickshire Borough Council (Planning Authority) with regard to the current application for the Daw Mill site (planning ref PAP/2014/0339).

Firstly I must outline my disappointment and shock at the change in stance of the Highway Authority. I believe that there are clearly a number of flaws in the reasoning behind opposing the initial plans to now supporting proposals, nowhere more so than the proposed ‘mitigation’ at the Green Man Crossing (B4114 / B4117 crossing) in Coleshill.

I strongly urge you to reconsider the decision on the following basis:

The fact that Highways were initially opposed to this shows the concerns they have over the suitability and impact of the proposals. It also suggests weaknesses in the proposed

Understandably, Residents have contacted me with real concern for the Daw Mill Proposals. This  letter is focused on the proposed ‘mitigation’ outlined in Warwickshire County Council's response as Highway Authority for the traffic implications of the proposed development.

The significant impact on residents in Coleshill and the affected villages demands that considerations on the Transport Assessment cannot be taken lightly and with his in mind, I  implore you to reconsider your decision and would be happy to arrange an urgent site visit with  you to ensure that the negative implications to the local area were fully understood.