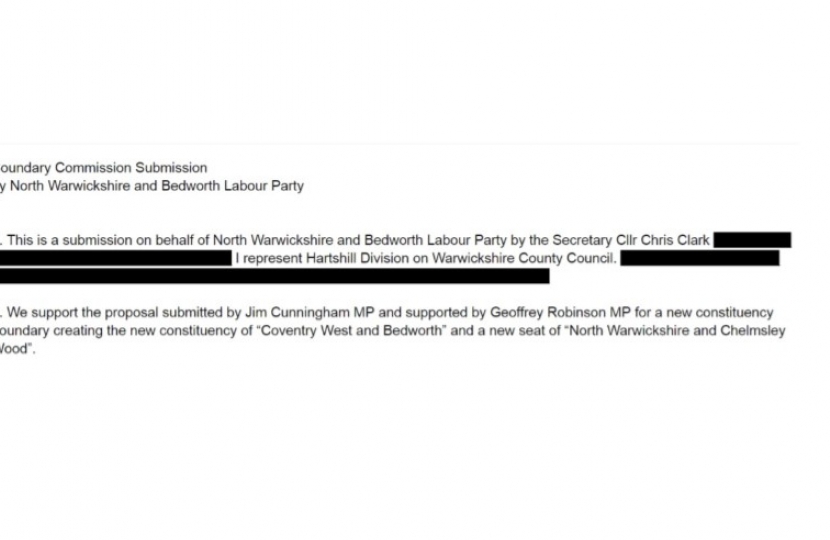 Local people have reacted with anger and bemusement over North Warwickshire Labour’s plans to break up the community in Boundary changes which has come to light today.

Labour Borough Council Group Leader Adam Farrell who represents Coleshill has called for Water Orton and Coleshill to be split away from North Warwickshire, claiming roads link the area to Solihull as the main reason.

He was joined by former Labour MP Mike O’Brien who bizarrely referred to social class and political reasons for why Bedworth should be moved to Coventry, stating:
“Few people in middle class Fillongley will work in Bedworth” and that “Bedworth is a working class town”.

Member of Parliament for North Warwickshire and Bedworth Craig Tracey – who backed boundary commission proposals to keep the community together with the additions of Arley and Hartshill said:

“Having spoken to a lot of local residents about this there is a clear feeling that our community should be kept together. We also want to see Bedworth be officially recognised in the constituency name and I was glad to see that many people in residents supported my campaign to be renamed ‘North Warwickshire and Bedworth’.”

Counter proposals to the new boundaries can be found on https://www.bce2018.org.uk and by entering your local postcode.

Craig Tracey MP is now calling on the community to join him in writing to the Boundary Commission to call on them to keep the community intact:

“The deadline for comments on the counter-proposals is Monday 27th March. It is really important that if you want to keep our community together you go to www.bce2018.org.uk and say that you support the original proposals for the North Warwickshire constituency which took in Arley and Hartshill, with the addition of including Bedworth in the name. If local people do not speak out Labour will get their way and divide our community – their reasons can only be political.”

In another shock, Coleshill Cllr Adam Farrell who is the leader of the local Labour Group, has called for Coleshill, Water Orton, Curdworth and Newton Regis Wards to break away from North Warwickshire – despite wanting to lead North Warwickshire Borough Council.

Water Orton Cllr David Reilly opposes this plan, he commented:
“This is madness.  There has been no call from local residents to move us out of North Warwickshire.  Why would you break up Coleshill, Water Orton, and Curdworth from our Borough community? I am proud of our North Warwickshire community and will do all I can to protect it.

“Mr Farrell is only representing his own interests.  It’s interesting that there is no mention of Labour’s proposals on their website, social media or in their election literature.  They are trying to break up our community on the quiet and for all the wrong reasons.

“Perhaps Mr Farrell or Mr O’Brien are hoping to stand in a seat they are more likely to win at the next general election.”