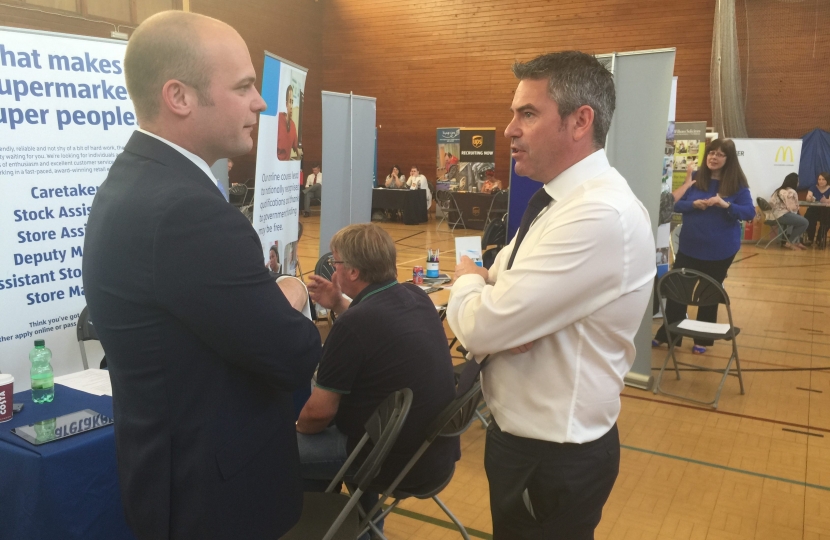 July proved to be a busy month in the constituency and Parliament with co-hosting a Jobs Fair for local people, a Conservative Budget and giving my Maiden Speech in the Commons amongst my highlights.

During my election campaign I pledged to carry on the hard work to improve job and apprentice opportunities in our community. Part of achieving this will be through an annual Jobs Fair – bringing together local and regional organisations that are offering career opportunities to local residents. I was delighted to work with Marcus Jones MP to host the latest Jobs Fair at North Warwickshire & Hinkley College. Over 1000 people attended on the day and we have received some good feedback by those businesses who were exhibiting along with local job-seekers.

Following on from this the latest figures for North Warwickshire & Bedworth were released showing that unemployment has fallen again here – locally there are now 265 fewer people out of work than last year, which is great news.

The long-term economic plan which has overseen the decline in unemployment reached its next stage in July. The Government produced a Summer Budget that was for working people and the first Conservative only budget since 1997. Significantly we will be introducing a National Living Wage – replacing the minimum wage which will see increases for hard-working people who are on lower wages. This is further indication that our economy is moving in the right direction.

It was during the Budget Debate in Parliament that I gave my Maiden Speech to the House. As tradition dictates on maiden speeches for new MPs, I tried to cover a wide range of facts about the constituency and community issues. I also re-affirmed my commitment of opposing HS2 and using my experience to promote local businesses. For those who missed it and want to see my maiden speech, it can be found online at www.Parliamentlive.tv or via my Facebook page.

We are now into recess where Parliament doesn’t sit, fortunately this allows me to spend more time in our community. I am pleased to say that my constituency office has been set up – we are located at 76 Station Street, Atherstone, Warwickshire, CV9 1BU and can be reached on 01827 715243 if you have any local issues.

Whatever you are doing this summer I hope that you and your family have an enjoyable and relaxing time.