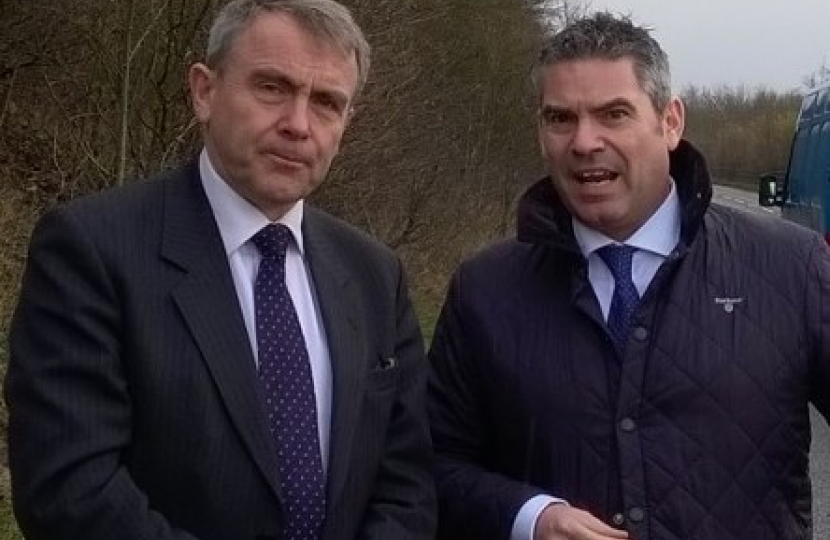 Local Conservative Candidate for next May’s general election Craig Tracey has shown a Transport Minister the impact of the HS2 Railhead at Kingsbury.

At Craig’s invitation, Robert Goodwill came to the local area to see for himself how HS2 will affect North Warwickshire communities.

Local campaigner Craig, who is against the HS2 project said:
“It’s important that resident’s concerns and the direct impact on our communities is fully appreciated. We are one of the most badly affected areas in the country along the proposed HS2 line. I took Robert Goodwill along the A4097 to the point of where the Railhead would be, and would run through local houses and businesses. This is the very local impact of HS2 for families – their homes or jobs could be lost.”

Minister Robert Goodwill said:
“We have just announced a new compensation package which includes the Need to Sell Scheme – the need to sell scheme – this scheme does not have a boundary and is available to owner-occupiers who have a compelling reason to sell their house (for example this might be as a result of job relocation or ill health) but are unable to do so because of HS2. The government will pay the full, unblighted value for these properties. This scheme replaces the Phase One exceptional hardship scheme (EHS) and those EHS applications that have not been consider by the panel will automatically be transferred to the need to sell scheme. This scheme is available in both urban and rural areas. This will be the most generous compensation package for any construction project in the UK.”

Speaking about the latest compensation package Craig Tracey commented:
“Of course we will continue the local fight against the scheme. However we must also ensure that mitigation and support for resident’s affected are in place and are fair for the ordeal that they are going through. The latest announcements include an express purchase – for those people living closest to the line. Under this scheme owner-occupiers may be able to sell their home to the government, if they wish to do so at its full unblighted market value, plus 10% (up to £49,000) and reasonable moving expenses, including stamp duty.

“There is also voluntary purchase - for people in rural areas outside the safeguarding area and up to 120 metres away from the line (this is the area defined as the rural support zone). Owner-occupiers in this area will be able to sell their home to the government for its full unblighted value at any time up until 1 year after Phase One first opens for public use.”