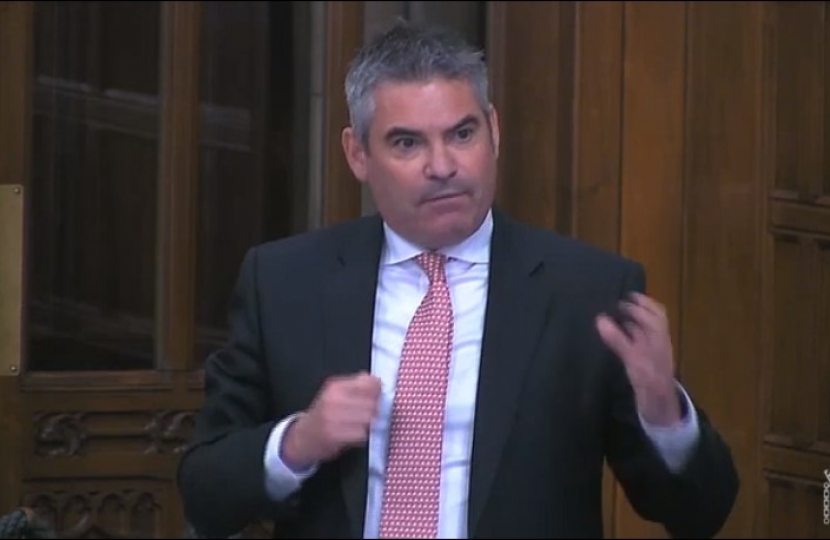 In Parliament last week, there was a debate on the Business Case for HS2. Craig attended the whole debate, but was not called to speak. He did make an intervention on the Minister's response to ask whether, when the rationale changed from speed to capacity, there should not have been a review of the business case for HS2 accordingly.

But as a result of not being called, Craig also undertook to publish the speech he intended to give. Here is what he would have said had he been called by the Chair of the debate:

"Can I congratulate my Right Honourable Friend (Andrea Leadsom) for securing this debate as it is an issue close to my heart and a subject I have spoken on many times before.

I agree with many of the points she has made and just want to make a short contribution as I have placed many of my concerns on the record already!

Before I come to the key points of my speech, it is important to set the scene of the impact on my constituency.

We are arguably the most affected constituency outside London - the route splits in half there. We get phase 1 & 2b, which accounts for 30km of track

Additionally, 16% of our Green Belt will be lost.

Today's debate is about the business case and this is something that I really struggle with.

In 2013, the Estimate for the Cost Benefit Ratio for phase 1 was £1.7, which was appraised to deliver medium Value for Money. However that was based on being delivered within the £55bn budget.

Interestingly, I can’t find any further Value For Money reports for phase 1 being done since

It is my view that there are three key limitations to the cost benefit analysis:

It extends over the entire appraisal life of the scheme, 67 years from 2026, meaning it is a very uncertain estimate.

It does not include all the scheme’s possible impacts – for example all the environmental and community costs - these have the potential of being borne by communities themselves such as North Warwickshire. One such matter raised yesterday to me was around increased policing costs for the area.

It is my understanding that original analysis was that the time spent on train was “dead time”. This is clearly not true. We have seen huge advancement of technology since the project was announced which allows pretty much all trains having WIFI. Mobile phone mobile coverage is also far stronger and more reliable. From a personal perspective, I actually use the slower train travelling to and from London, not just because its cheaper, but because the shorter train means that I don’t have the opportunity to catch up with work.

So on these points alone, I think we really do need a review of business case before we proceed

And that brings me on to another key point - the argument of speed vs. capacity

Where this project was initially brought forward (I have been involved in my opposition to this since 2008 -) the argument was made and business case put forward on the basis of speed, but that rationale has now changed and capacity is the issue of the day it is trying to solve.

Whilst I can understand this point, I would ask Minister when this became the case, how many other options were then considered? Much of the devastation being caused to countryside & peoples way of life was based on the line having to be as flat and straight as possible. These accommodate speed not capacity….

It has been brought to my attention many times, by lots of people, that when capacity became the issue, there were potentially plenty of other solutions that could have been put forward. Examples such as longer trains, lengthening of platforms, declassification of some 1st class carriages at certain times and upgrading of signalling have all been put forward.

and there are Key benefits to these alternatives:

Only delivered as and when necessary - We are trying to predict what rail demand will be by the time HS2 is delivered.

Even from the time the scheme was first proposed, we have seen huge advances in technology resulting in changes of working practices.

Critically, it will benefit more local people as they could be integrated into current network

Moving on to the costs, the £55bn current estimate does seem to be disproportionally high, particularly when you compare it to some of the fully costed suggestions in the report I did with Tax Payers Alliance on what people would actually like HS2 money spent on.

Some of the suggestions included:

For £1.3bn you could put a dual carriageway on A1 from Durham to Edinburgh

One I found incredibly fascinating - £1.82bn build cycle paths alongside every motorway & A road - covering 7,600 miles!

So I think there is a clear opportunity to review both the project & business case - there are very real options to deliver things actually make a difference to a far greater amount of people than HS2 ever will.

And as I constantly remind the Government, it is relatively easy to get North to South in this country - getting East to West is far more difficult.

Talking to my constituents, what they want is to be able to get from Villages to towns, and from towns to cities. If we really want to give everyone the same opportunities, these are the issues that need to be addressed

I don’t believe we have reached to point of no return with HS2, so I would urge the Government to carefully consider whether this project is the best use of public funds when there are other exciting schemes out there which have the potential to bring benefit to a much wider audience of our constituents"