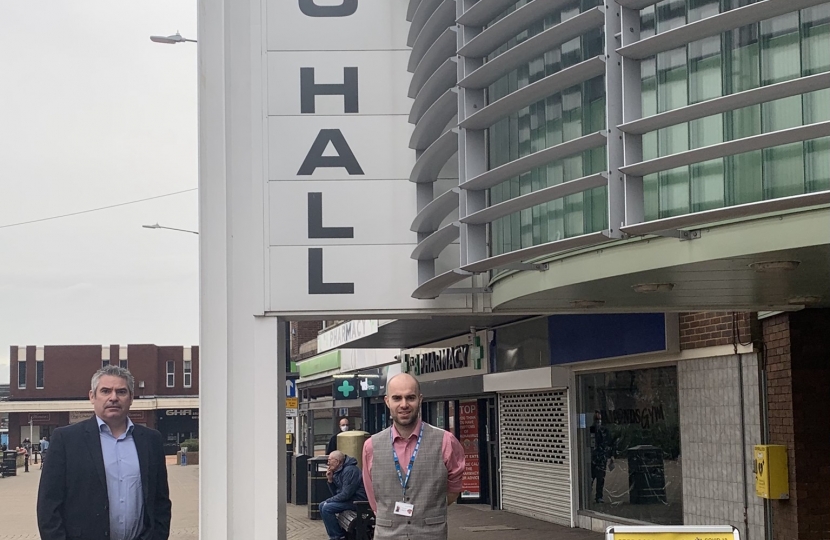 Great to meet with Mark, Ops Director for CWPT who looking after the vaccine roll out at Bedworth Civic Hall and to get a run through of how things are progressing.

To get this site up and running was an incredible achievement, done at very short notice when it was clear a centralised site for Bedworth would be the most effective way forward. Despite this, they still hit the national target of vaccinating all priority cohorts 1-4 within the national time frame (They hit a day ahead of schedule on Sunday).

This set up was a massive challenge, essentially merging data from 11 GP practices in to one system. No vaccines have been wasted in the process and their time has been incredibly effectively used with few vacant slots. At the point recently where most of the cohorts had been done, as I posted last week, then turned their effort to helping with those who are housebound.

Currently they are now hitting up to 700 vaccinations per day and there are up to 15 clinical staff on site at any one time.

As we now move on to the next cohorts (5&6) as of yesterday morning, they had already received over 1,000 bookings.

We discussed "Reserve lists" and Mark was keen to clarify that as they have become so efficient in managing their process, tied in with a more stable supply line, that they don't have to run one. There are still no wastage of doses but their internal contingency processes now mean that there is no need to call people in at short notice to avoid this.

It was hugely impressive to see the work in involved in running this centre and I would like to say a huge thanks to Mark and his team for all they are doing. We should all be proud to have this on our doorstep!

Just a quick note on overall progress where in the space of 10 weeks, we have managed to vaccinate 1 in 4 adults and the total stands at 15.9m having received it.

There is also a clear downward trajectory on infection and hospitalisations (both nationally and locally) where they are significantly lower than had been projected. Infections alone have dropped by 2/3rds since January and whilst there are still 4,800 people in critical care, 6,000 beds remain available.

Movement in the right direction and I look forward with interest to the Prime Ministers statement next week on the future roadmap.