Craig Tracey MP: “This is a budget for working people in North Warwickshire” 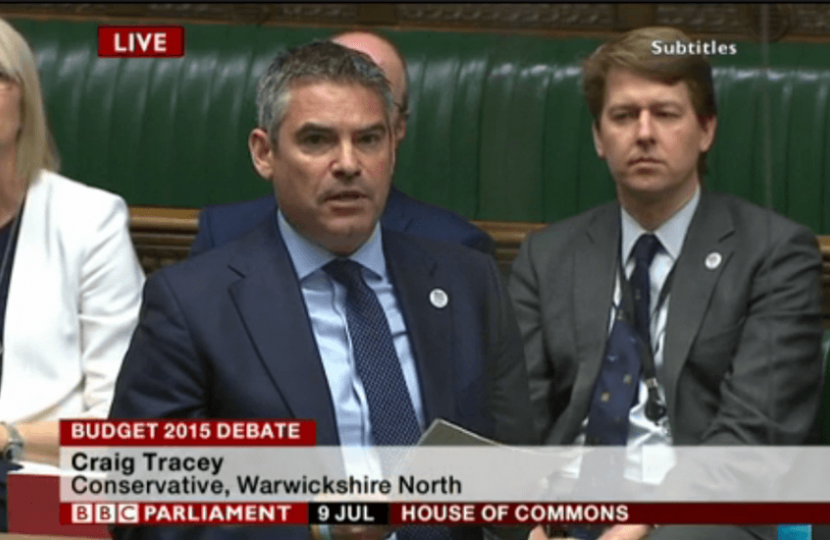 North Warwickshire & Bedworth’s voice in Parliament has expressed his support for the summer budget that was announced by the Chancellor today. The significant announcements were described as being for ‘working people’ and the budget has been heralded by commentators as ‘one of the most significant in recent times.’

Craig, who ran his own small business locally for 20 years, and sits on the influential Business Innovation and Skills Select Committee, commented:

“Working people in North Warwickshire & Bedworth will be delighted by today’s announcements. The Government has been working to a long-term economic plan and we are now reaping the rewards. The National Living Wage will ensure those on the lowest pay will see their salaries rise significantly over the next few years. Local Businesses will also benefit from cuts to Corporation Tax, supporting growth and employment; the Conservatives are the Party of working people and business.”

The budget sets out the action the Chancellor will take to put security first:

·         The economic security of a country that lives within its means: the forecasts show Britain will be the fastest growing major advanced economy for a second year in a row, but the deficit is still too high so the Budget sets out a balanced plan to cut the deficit at the same rate as in the last Parliament to achieve a surplus.

·         The financial security of lower taxes and a new National Living Wage: The new National Living Wage will mean two and a half million people get a direct pay rise. Those currently on the minimum wage will see their pay rise by over a third this Parliament, a cash increase for a full time worker of over £5,000. There’s further support for working people with an increase in the tax-free personal allowance so someone will be able to earn £11,000 before paying any income tax at all. We will also raise the 40p rate to £43,000, lifting 130,000 people out of this higher tax rate.

·         Cutting tax on business to secure growth with Corporation Tax reduced to 18 per cent:we’ve already taken this rate to the lowest in the G20 and aligned it for large and small businesses, but we cannot afford to stand still so will cut it further to send out the message that Britain is open for business.

·         The national security of a country that defends itself and its values: The Budget commits to meeting the NATO pledge to spend 2% of our national income on defence – not just this year, but every year of this decade.