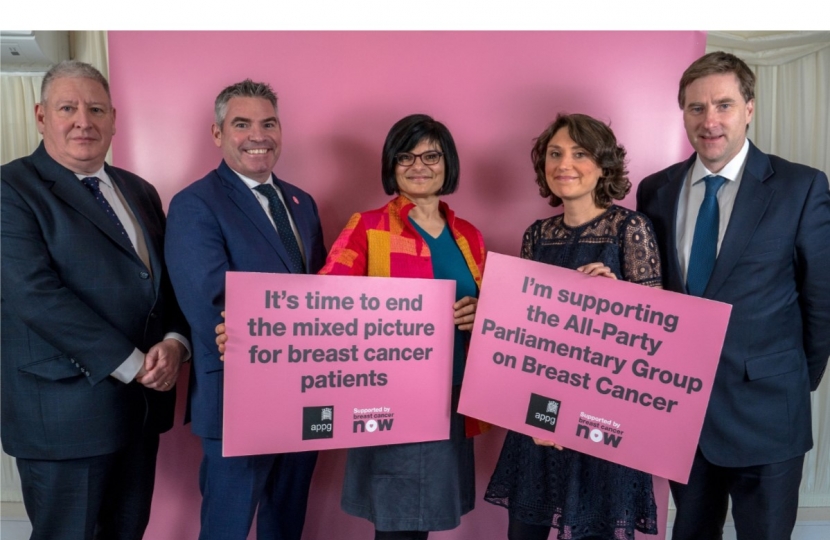 Co-Chair of the APPG on Breast Cancer and local MP Craig Tracey helped launch a new report on the treatment received by cancer patients.

The report published a number of findings:

Screening attendance inconsistent across England – with uptake in West Midlands falling 5.1% in the last decade

The report revealed that in the West Midlands in 2016-17, 71.2% of women invited to screening attended within six months, surpassing the national target of 70%. However, the report worryingly shows that, despite meeting the national target, screening uptake in the West Midlands has fallen sharply by 5.1% in the last ten years, reflecting the concerning countrywide decline.

Women between the ages of 50 and 70 are invited for routine mammograms every three years as part of the NHS Breast Screening Programme. A major independent review in 2012 showed that NHS breast screening prevents 1,300 deaths from breast cancer each year, with around a third of all breast cancers in the UK – roughly 16,000 cases a year – diagnosed through the Programme.

Despite local variation in early detection, West Midlands is performing better than other major regions in England
Depending on where they live, the report found that women in the best-performing areas are over twice as likely to have their breast cancer detected at an earlier more treatable stage.

Despite some variation between CCGs, overall the West Midlands performed above the national average (71%) for early detection, with 73.6% of breast cancers detected at early, more treatable stages (stage 1 and 2). In Birmingham Cross City CCG – the highest-performer in the region for early detection – 30% more breast cancers were diagnosed at early stages than elsewhere in England.

Following the report’s publication, Craig Tracey MP and the All-Party Parliamentary Group on Breast Cancer is calling on NHS England and Public Health England to urgently address the stark geographical variation in breast cancer services by:

“Our report uncovers widespread differences in the diagnosis, treatment and care of women with breast cancer, based on where they live.

“The number of women being diagnosed with breast cancer is steadily increasing and local NHS services must be fully resourced to meet this demand.

“It’s really encouraging that the West Midlands as a whole is meeting national screening targets and is above the national average for early detection. But this report unearths wide variation across the country and we must ensure the worst-performing CCGs in the region are brought in line with the best, where local innovation is already driving real progress.

“While such variation across the region exists, we’re falling short of the Government’s ambition of world-class outcomes for all cancer patients. We call on NHS England and Public Health England to work with the West Midlands Cancer Alliance to ensure they receive the support they need to meet this challenge.”