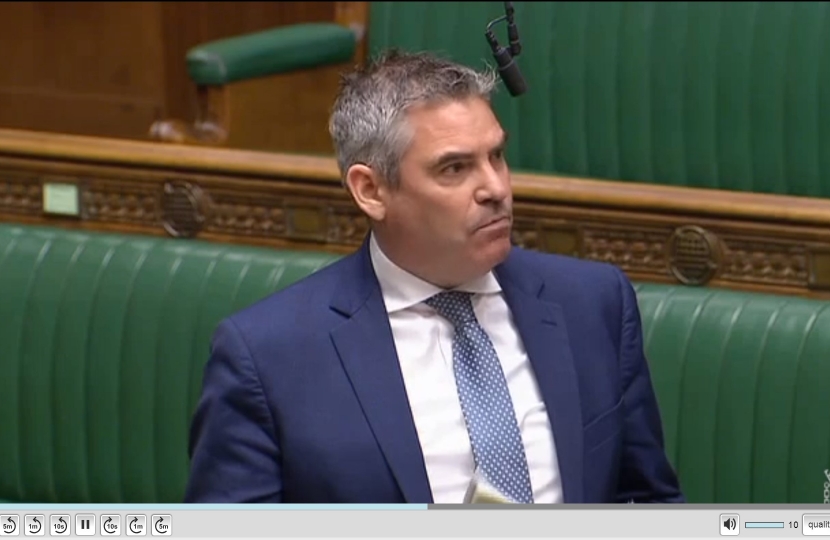 My speech during this important debate is below:

“I am delighted to speak in this debate, and I thank all Members who have contributed, particularly those who have tabled amendments. I have listened carefully, and I sympathise with many of the points that have been raised, particularly on extra support for police officers and the issue of spitting. I look forward to the Minister’s comments.

I am sure that we all agree that assault on anyone in any situation is awful, but to attack someone who is trying to help another person in an emergency is callous, heinous and totally unacceptable. Punishment for such assaults on emergency workers should fit the crime, and I believe that it is right and fair to give a judge the ability to take them into consideration as an aggravating factor in determining a sentence.​

I congratulate the hon. Member for Rhondda (Chris Bryant) on introducing the Bill and add my support for amendment 3, which is a sensible addition. I also thank all the other Members who have put work into the Bill, particularly the hon. Member for Halifax (Holly Lynch). As we have heard, it takes quite a bit of work to get a Bill to this stage, and this is an important Bill.

Emergency workers are courageous and dedicated. Moreover, they are selfless in their endeavour to help people. There can be few more noble callings and no more worthwhile purpose. I see that clearly during my regular visits to the George Eliot Hospital, which serves my community in North Warwickshire and Bedworth and the surrounding area so well. I see it each time I meet local police across the constituency, never more so than recently when they responded professionally and decisively to the case of a hostage situation at a bowling alley. I have seen it when I had the pleasure to meet the North Warwickshire community first responders, volunteers ably led by Samantha Hall who give up their time because they want to help save lives. I know North Warwickshire is particularly proud of them, as am I. Samantha got married to her partner Graham a few weeks ago, and I pass on my congratulations to them, and I am sure that colleagues here today will join me in wishing them the very best for the future—[Hon. Members: “Hear, hear.”]

The responders are volunteer members of our community, trained by the ambulance service to respond to emergency calls through the 999 system. They provide immediate care to patients and are mobilised by ambulance control. They are a part of their local community, serving an area of approximately 3 miles in radius from their base, which can be their home or place of work, so they can attend the scene of a medical emergency in a very short time, often arriving within a few minutes of the call and sometimes while the caller is still on the phone.

The team are trained to provide emergency life support and to treat patients suffering from a range of conditions. On the arrival of an ambulance, they form part of the team treating the patient. It is my understanding that the Bill will protect emergency workers including volunteers such as the North Warwickshire community first responders, as they are contracted to provide a service by the NHS, but I would be grateful if clarity can be provided on that point, as they certainly deserve the additional protection that this Bill will give to emergency workers.

It is repulsive to imagine any emergency service worker being attacked in the line of duty while saving and protecting, as their name makes clear, those most in need. However, this happens on an all too regular basis across the country. I was shocked to learn that NHS staff—those who are treating sick or injured people—recorded more than 70,000 physical assaults during the year 2015-16. It is worth dwelling on that figure for a moment, as it is the equivalent of 53 assaults per 1,000 members of staff. I am sure that all right hon. and hon. Members will agree that that is 53 assaults too many.

In our prisons, officer assaults have risen by more than 30% to more than 7,000 in the past year. However, I am encouraged by the fact that the Government are taking action to increase the number of prison officers. They have recruited 3,100 new officers, many of whom ​will be in place by the summer, which will help to reduce the figure. None the less, I can see the sense in new clauses 4 and 9 in providing greater protection for prison officers. As I said, I look forward to hearing the Minister’s response on that.

The Police Federation states that the latest welfare survey data

“suggest that there were potentially more than two million…unarmed physical assaults on officers over a 12 month period, and a further 302,842 assaults using a deadly weapon during the same period.”

It estimates that an assault on a police officer happens every four minutes. Those statistics are shocking and make it clear that action needs to be taken.

This crucial change in the law will send a clear message that attacks on emergency workers will not be tolerated. I welcome the cross-party work that is being done to ensure that those who are violent face the full force of the law. I draw parallels here with our armed forces, and I have previously said in this House that, to enable them to do their job and, more importantly, to give them our backing, we cannot allow spurious legal cases to linger in their minds, as that can reduce recruitment, morale and retention, and, critically, prevent them from doing the job that they have been so highly trained to do.

Similarly, we must guarantee that our emergency workers—those who are in the frontline of responding to life or death situations, or upholding the law—have full protection while carrying out their duties. Those personnel, from ambulance paramedics who are first on the scene to dedicated nurses who care for the sick and firefighters who run into burning buildings, have called for greater protection, and it is right that we deliver it for them. In February 2017, the Police Federation’s campaign “Protect the Protectors” called for a change in legislation leading to tougher sentences for those who assault emergency service workers and more welfare support.

As I said at the start of my remarks, there is no excuse for assault of any kind, but an assault on an emergency worker, who is acting in the line of duty, simply cannot be tolerated. Shamefully, such occurrences are not uncommon and are happening every single day while people are performing their duties in protecting and saving our constituents.

This Bill may not deter every criminal from assaulting an emergency worker who is carrying out their duty, but the new offence will provide increased protection under the law for emergency workers who are assaulted in the course of their day-to-day work. Encouragingly, that increased protection will also extend to situations where an emergency worker is not at work, but is acting as if he or she were—for example, when an off-duty firefighter rescues someone from a burning building. I warmly support the reasoning behind the Bill and the improvements that it will bring in protecting those who dedicate their careers and lives to helping and protecting us.”