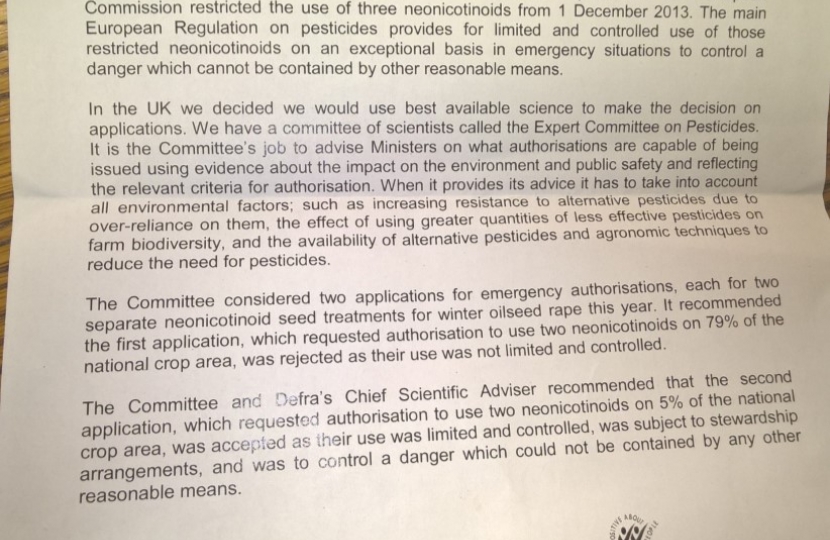 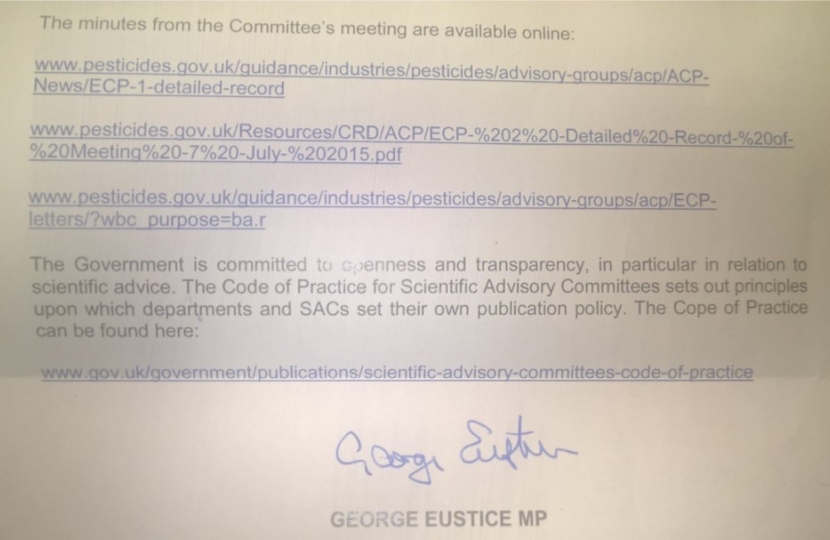 Updated November 2017: Today the Environment Secretary has backed new restrictions on pesticides shown to be harmful to bees.

Tougher restrictions on pesticides known as neonicotinoid pesticides are justified by the growing weight of scientific evidence that they are harmful to bees and other pollinators.

UPDATE: This year there have been two separate sets of applications to use neonicotinoids on part of the country's oilseed rape crop, but in each case the Committee advised that the applications did not give sufficient assurances that the uses would be limited to those areas most in danger, nor that they would be controlled appropriately. Accordingly, Defra followed the advice of the Committee and has declined these applications.

Rest assured that restrictions on neonicotinoids will not be removed as long as the evidence shows that they should remain.

UPDATE: Further to below I have received the following update from the Department for Environment, Food and Rural Affairs (DEFRA): ‘We very much recognise the importance of bees and other pollinators to our food security and natural environment. That’s why: • in November 2014 we published the National Pollinator Strategy to provide a framework for collective action to help manage and raise awareness of the pressures facing pollinators • we have also launched the Bees' Needs campaign to raise public awareness • our £3 billion Countryside Stewardship scheme includes the first ever wild pollinator and farm wildlife package, which will see more funding made available to farmers and landowners who take steps to help pollinators thrive The UK Government has implemented the EU restrictions on neonicotinoids in full. An EU-wide review of the science relating to neonicotinoids and bees is now under way and the UK will contribute to the review as it progresses. We have said throughout that we want this to be founded firmly on a strengthened scientific evidence base. We have also made clear that we believe that decisions on the use of neonicotinoids should be based on a full assessment of all the available scientific information. As part of these restrictions, emergency authorisations for crop protection are permitted as long as they are deemed necessary “because of a danger which cannot be contained by any other reasonable means” and are for a “limited and controlled use”.

We continue to believe that decisions on the use of neonicotinoids should be based on the science and that decisions should be made only once regulators are satisfied that they meet safety standards for people and the environment. We will also continue to do everything we can to boost the vital habitats that bees and pollinators need, as well as encouraging everyone from major landowners to window-box gardeners to play their part.’

I wrote to DEFRA highlighting the concerns of constituents who had contacted me over the use of neonicotinoids and its impact on Bees.The image of the Minister's letter response to me can be found on this page. I agree that that bees and other pollinators play a vital role in the security of our food supply and the quality of our natural environment. I welcome the work the Government has done over the last few years to understand and protect them, most recently through the National Pollinator Strategy. Pesticides are tightly regulated, and decisions on the approval of these substances are made at the European level. Since December 2013, three of the five currently approved neonicotinoids are not permitted for use on a wide range of crops considered attractive to bees. The Government has implemented these restrictions in full. They are not time-limited, and will remain in place unless the European Commission decides to change them. The European Food Safety Authority has begun a review of the science relating to neonicotinoids and bees, which is expected to conclude in the summer. This includes looking at the effects on bees caused by seed treatments, and uses of the restricted pesticides in the form of granules. The Government has said that it will contribute fully to this review, because any decisions must be based on solid evidence.